Exercise is not easy. Ask any unfit person that wants to turn a new leaf, goes out and run a 5km. One feels good after completing that distance. But afterwards, pain sets in, your muscles become stiff and sore, the typical delayed onset of muscle soreness (DOMS for short).

What is described above is not caused by lactate build-up (the myth has been busted), but actually by small muscle tears that cause the content of the muscle fibres to leak into the blood stream, such as creatine kinase and myoglobin. Inflammation also follows making the muscles feel tender. This response is normal for any mammal after exercise and our bodies adapt to these stresses quite quickly. Severe muscle damage and breakdown can lead to a condition collectively known as rhabdomyolysis.

The danger is that this rhabdomyolysis, if untreated, can lead to kidney damage by means of the myoglobin that clogs the renal filtration apparatus and eventually leads to renal failure and death. A definitive sign that rhabdomyolysis has set in is the appearance of dark coloured urine, ranging from light brown to very dark brown.

It seems that excessive exercise is the predominant factor that causes rhabdomyolysis. But, other factors can hasten and / or aggravate the severity of the muscle damage. Some include certain drugs (e.g. statins, alcohol, amphetamines, non-steroidal anti-inflammatories), congenital metabolic myopathies, inflammatory myopathies, infections, toxins, and muscle injury.

We aim to study as many cases of rhabdomyolysis in humans, wild animals and horses to better our understanding of the potential causes, diagnosis and prevention thereof. Our research focusses on trying to find out why muscle breaks down under certain stressful conditions, how it can be prevented and cured.

What is capture myopathy then?

Every wildlife rancher, wildlife translocator, veterinarian and wildlife auctioneer fear these words. This so-called condition is the Achilles heel of the wildlife industry. Horror stories range from losing one eland to loosing literally the whole truckload of animals to this condition. As can be expected, it can lead to massive financial loss. But, what is capture myopathy? What causes it? And most importantly, if one has animals, especially very expensive and rare ones, how do you treat or prevent this condition?

Capture myopathy goes by many names – capture stress, exertional myopathy, overstraining disease, white muscle disease and exertional rhabdomyolysis. Some also knows it as Monday Morning Disease seen after well-fed horses, which have rested over the weekend, are heavily exercised on Monday mornings. But, capture myopathy or capture stress would suffice. The condition appears primarily when wild animals are captured. The signs that animal has capture myopathy are:

Signs of capture myopathy can manifest within minutes (acute form), or take days to appear (chronic form). The survival rate of these animals, once they have progressed to the stage where the urine is dark, is very bleak. If the animal survives the acute stage of the condition, scarring of heart and skeletal muscle tissue may permanently debilitate the animal or even later in life lead to heart failure under normal stressful situations. In all likelihood, animals would probably be euthanised to stop them from suffering. But, sometimes the decision to euthanise is extremely difficult, especially when the animal in question is valuable.

What is the link with humans?

Disturbingly, humans share a similar condition, known as exertional heatstroke. This condition is different from the classic heatstroke observed in children and the elderly resulting from extreme environmental temperatures. Compared to capture myopathy, exertional heatstroke occurs in unfit humans such as fresh military recruits or those exposed to substance abuse. Elevated body temperature and muscle breakdown, giving rise to dark urine and kidney damage are the primary symptoms, and many have died from this condition. In both animal and human conditions, it was believed that the conditions are caused by extreme exertion of the animal and high environmental temperatures. But this is not so, as we will see later.

This is indeed the million-dollar question. First, it seems a global problem with wildlife, with reports of capture myopathy occurring in dolphins, wild birds and most other mammals, crocodiles and even fish. What is the cause, or better yet, what do we think may cause capture myopathy?

Scientists have been struggling with this question for over a millennium. If it were that simple, the problem would have been solved years ago. Arguments range from species being more susceptible, genetic mutations to nutritional deficiencies. We also know that extreme hypoxia, lack of oxygen to muscles and organs, can cause tissue breakdown. For example, crushing of human’s muscles during earthquakes by concrete rubble causes a number of toxic compounds, such as increased potassium concentrations to accumulate in the blood. Once crushing is removed and blood flow is restored, these toxins can cause serious damage to organs or lead to a heart attack.

Similarly, when large animals are sedated, the pressure exerted by the body on the limbs when they lie down, can cause hypoxia in the muscles and eventually lead to muscle damage that, as in the case of crushing, can affect the internal organs. But, not all animals are heavy and exposed to that risk. Extreme exertion has also been associated with causing capture myopathy, but we believe the combination of extreme fear and exertion may be the culprit, although not yet proven.

We know that the breakdown of skeletal muscle in humans can be caused by exercise in conjunction with taking over-the-counter or illicit drugs. Binge drinking the night before an endurance race has also been reported to trigger this condition. Of course, the chances of wild animals getting their hooves/paws on these drugs are very slim, so we are ruling that out.

But, there are other candidates that can trigger muscle breakdown. For example, defects in the genes coding for muscle metabolic proteins can cause capture myopathy-like symptoms, such as hyperthermia and muscle breakdown. The condition known as “tying-up” among horses has now been shown to result from a defect in muscle glycogen metabolism, where these animals are unable to use their muscle carbohydrate stores for energy. Dogs, cattle and even whales have been diagnosed with genetic disorders that are known to cause muscle breakdown when these animals are subjected to exertion. What is still unknown, though, is how defects in genes, or a nutritional deficiency or toxins/drugs can cause muscle to break down.

The final candidate hinted towards earlier, is unfit humans and animals, with no genetic disorder, drug use or nutritional deficiency. To start off, trained athletes do not get exertional heatstroke!

In fact, athletes running a 10 km Olympic event can reach core body temperatures of 42°C without any harm! It is usually the untrained person who wants to cycle a 100km race or run a half marathon who acquires this condition.

On the animal front, the book by Bothma, Game Ranch Management, mentions a technique by which antelope are “trained and tamed” in a boma to reduce capture myopathy. The question therefore is whether capture myopathy stems from being unfit. Therefore, by studying exercise training and its effects on the muscle and how it protects the muscle from degradation may hold the secret to why some animals develop capture myopathy.

Unfortunately not. Once the animal has reached a certain point, the chances of recovery are very slim. It was thought that injecting selenium or vitamin E would stop the development of capture myopathy, but the results are inconclusive. The same can be said for the human condition, where these injections failed to reverse exertional heatstroke. So far, emersion of athletes in ice water for a few hours with constant monitoring of core body temperature has proven to show some success. Unfortunately, if this treatment is started to late, athletes are left with neurological damage, coma or death. Submerging animals in ice water would be an enormous logistical nightmare, but we have been experimenting with other practical cooling techniques.

What are we doing?

Our research team has come up with a research plan to combine skills, technologies and techniques from the two disciplines, veterinary and exercise science, to search for the causes of capture myopathy. Both parties have agreed that much can be learned from each other. Since 2009, we have studied the skeletal muscle of a number of species, including lion, caracal, springbok, kudu, blesbok and black wildebeest. What is fascinating about their muscles is that everything we thought we knew about skeletal muscle and how it functions, is substantially different from humans, rats and frogs. For example, the muscle of the antelopes and wild cat family (cheetahs, caracals, lions) have a metabolism that does not follow the normal train of thought. To simplify, their muscle metabolism looks more like a rocket engine, compared to the VW beetle-like engine of humans (with all respect to the VW beetle). Because of this extremely high metabolism, the wild animals could theoretically be predisposed to developing muscle problems if they become stressed or extreme exertion (like a car overheating). How this would occur and what the targets are is to be investigated. Thus, there is hope. 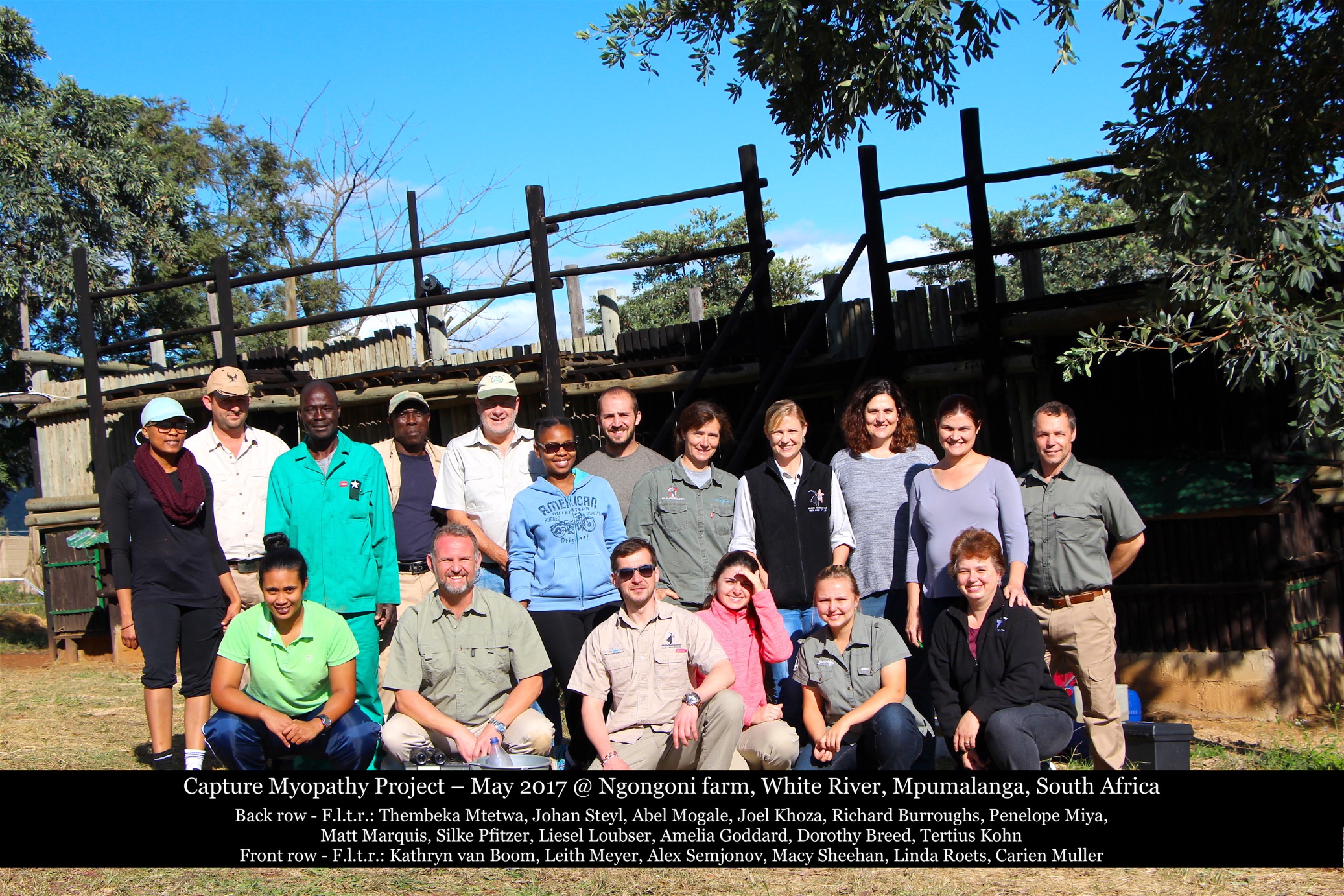